Possibly the earliest notice of Minto is mention of a church in Bagimont’s Rolls of 1275.  In 1375, Edward III. issued a writ for the exchange of Mynto for Yetham. In 1390, John Turnbull, of Myntow, granted the lands of Myntow to Sir William Stewart of Jedworth, confirmed by Robert III. On the 30th April, 1706, Sir Gilbert Elliot obtained a grant of the barony of Minto. The title of Lord Minto derives from the ancient seat of his progenitors, who have been distinguished for talents both useful and elegant.

The origin of the name of Minto is obscure. In ancient charters it is generally spelt Mintoiu and Mynthoiv. The Gaelic etymologists are studious to explain the Celtic word Minto to mean the kids-hill; observing the craigs of Minto to be interspersed with shrubberies, and recollecting that kids delight to sport among dangerous heights and to browse on “steepy craggs.” It may be allowed then, that Mynn in the Cambro-British, and Meenn or Min in the Scoto-Irish do signify a kid. But, among the many names in the Scoto-Irish for a hill or craig, to, tow or thow, does not appear.

The British speech is more likely to furnish the true etymon of Minto. In it Mynta signifies an aggregate; and Myntai what is aggregated. Either of these words may have been applied by the British settlers here to the congeries of rocks which are even now known by the name of Minto-craigs.

In their language Min-tau denotes the brink or edge which extends out; Min-to means the exterior brink or border; and Min- tua signifies toivards the brink(s).

Now, the village of Minto stands on a plain field near the bank of a rivulet. At some distance on the same side of the streamlet stands the church on the top of a steep bank.

The mansion-house of Minto is placed on the opposite bank, which extends out into an angular point, which is formed by the junction of two rivulets at the foot of the steep bank. 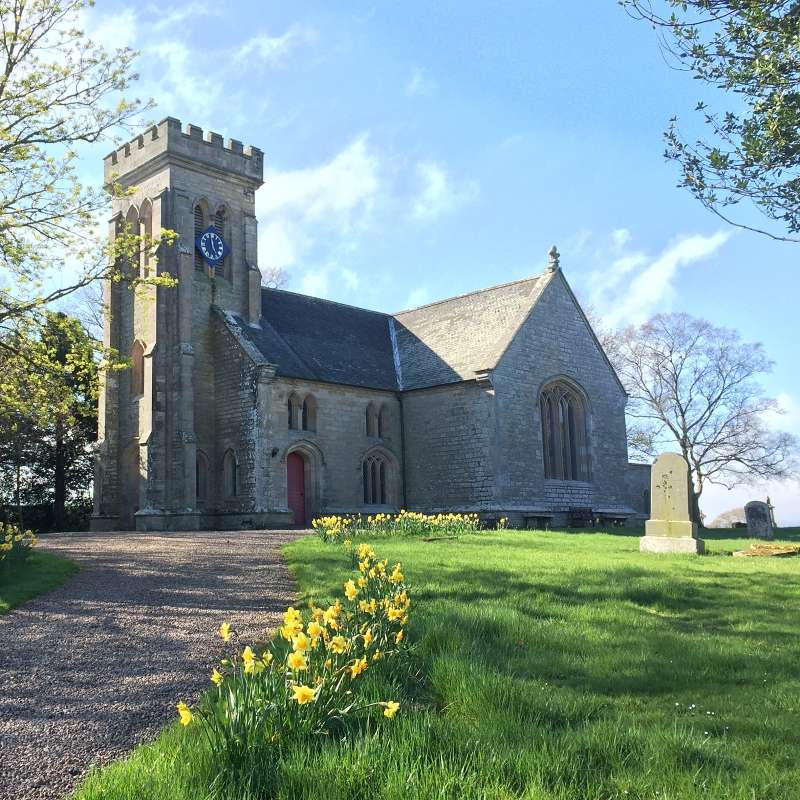 The church at Minto designed by William Playfair dates from 1880 with the interior recast in 1934. The Elliots enjoyed a private gallery in the church. The original church organ was presented by the Countess of Minto in 1880. 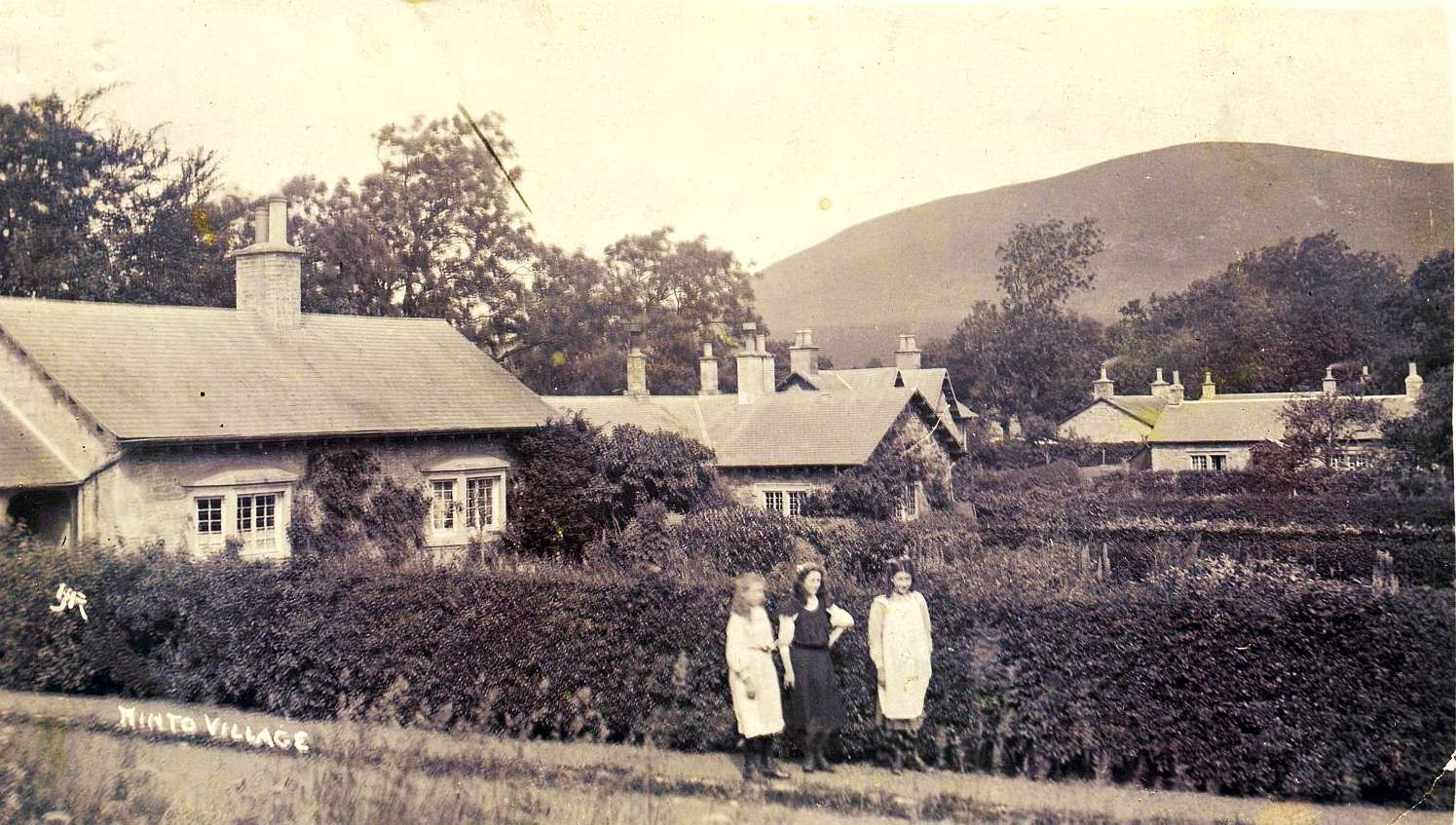 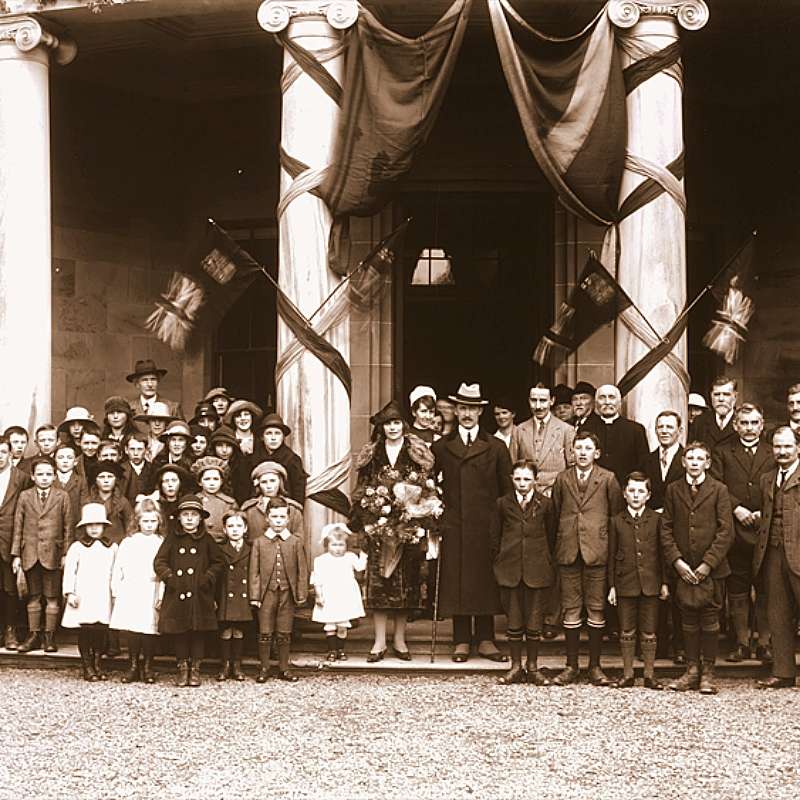 Estate workers welcome for 5th Earl Minto and his bride, on the occasion of their first visit to Minto House after their marriage in Montreal, 19 January 1921. 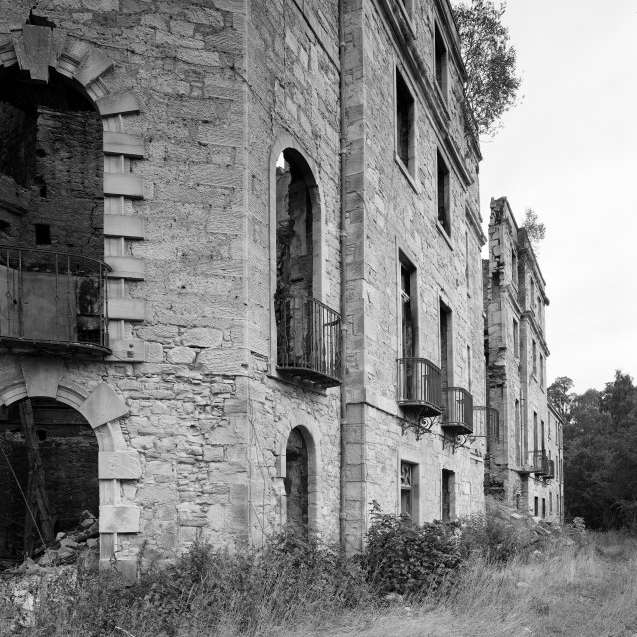 Lodges North, East and West of the original Village were built and rebuilt over the centuries. Sitting at the entrance to the village, West Lodge with its intricate woodwork dates from the late 19th Century

The town of Minto appears in 1383 in a list of rentals paid to Roxburgh Castle. It was burned in a raid about 1490, then again in 1545 along with most of the surrounding area. It stretched in a staggered line along a north-west axis near the old church. Another cluster of houses stood on the roadside near West Lodge; one was occupied by the village cooper, giving rise to the Cooper’s Brae. The old town had a change house, a public host house, a brew-house (supplied by local barley malted nearby), a school (established in the 17th century) and a shop. Lint fields behind Minto Crags were spun and woven into linen by the villagers, while Minto Moss, Langhope, and Shielswood provided peats for fuel. There was also a mill near East Lodge on the Ancrum road, fed by a cauld above Spittal Ford.

Remarkably, in 1827-31, the village was moved in its entirety so the 2nd Earl wouldn’t be able to see it from his mansion! The current village was planned out by William Playfair, and soon gained a reputation for having no paupers, no toll-bars and no public houses. The new school was established in 1838 with 112 pupils. Half a dozen donkeys grazed in its playground and were used to transport pupils to and from the countryside. Sir James Murray, the first editor of the Oxford English Dictionary, was a scholar at the school.

The original ‘Hill House’ now replaced by a more modern building whilst retaining the similar outlook with a view across to Minto Glen. 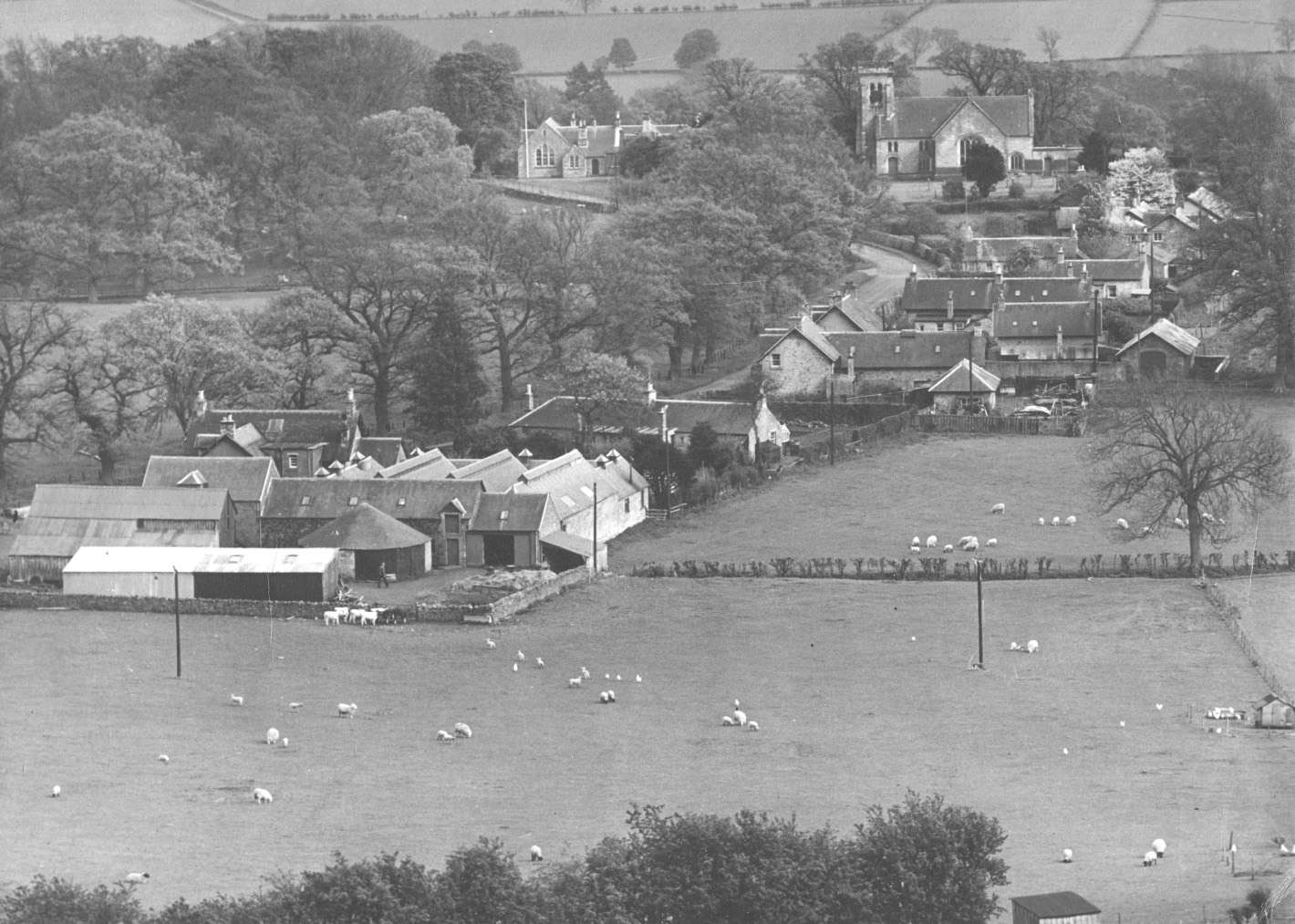 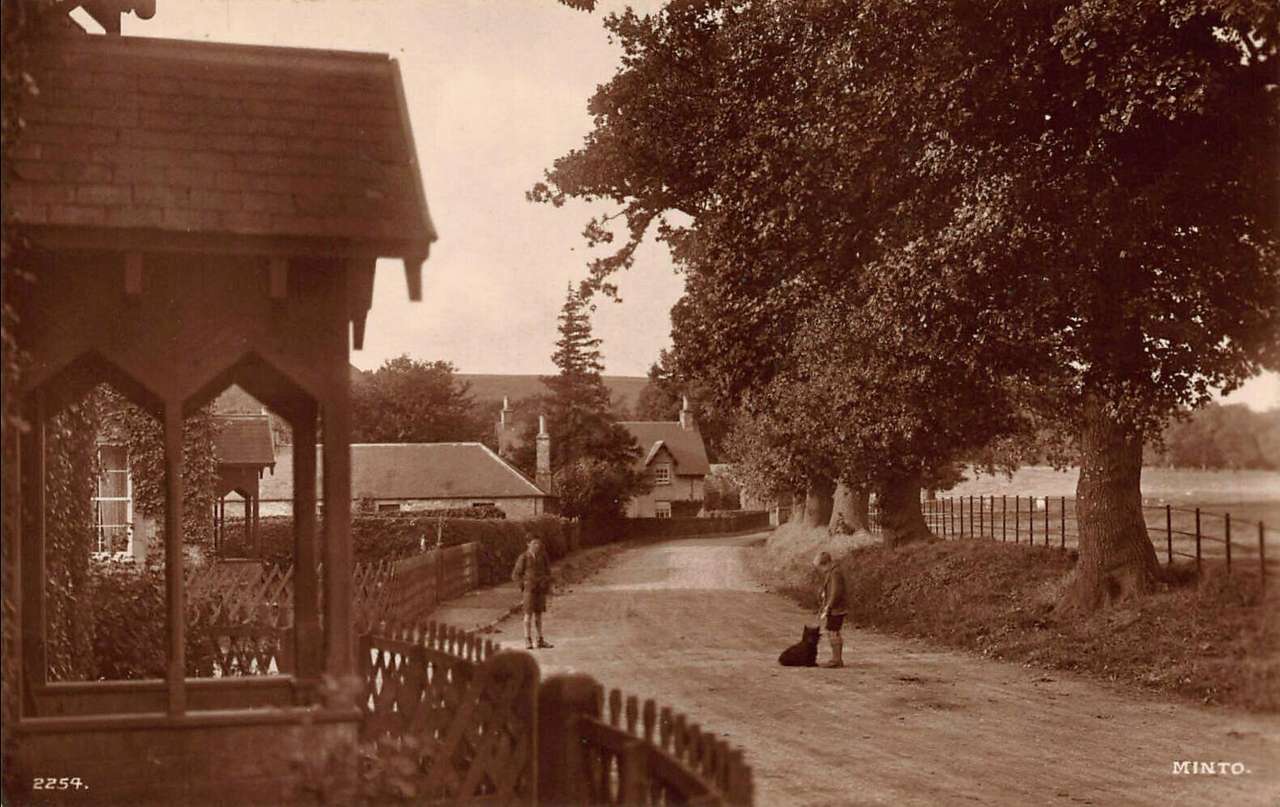 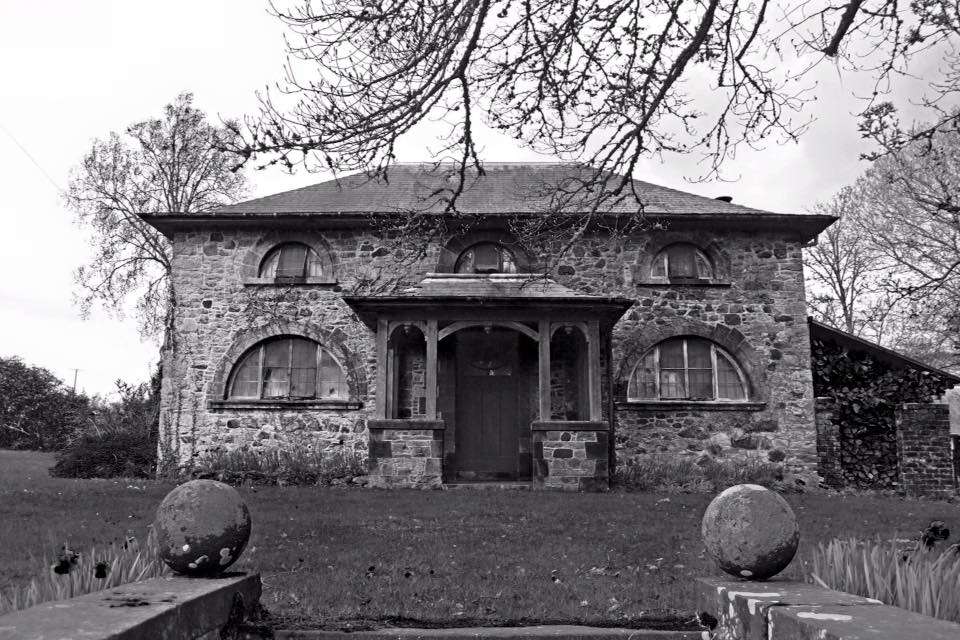 The Old Dairy at Cleughhead 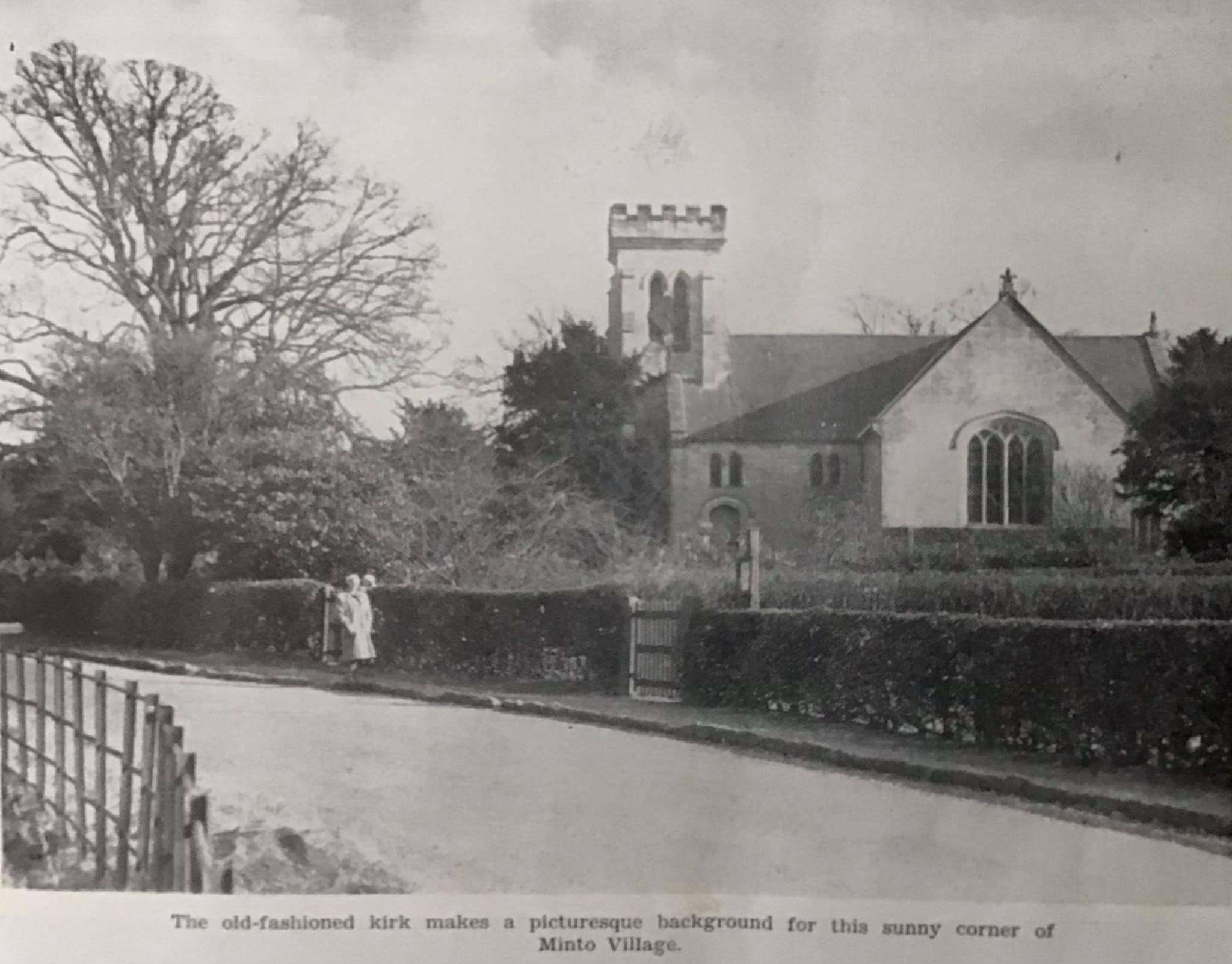 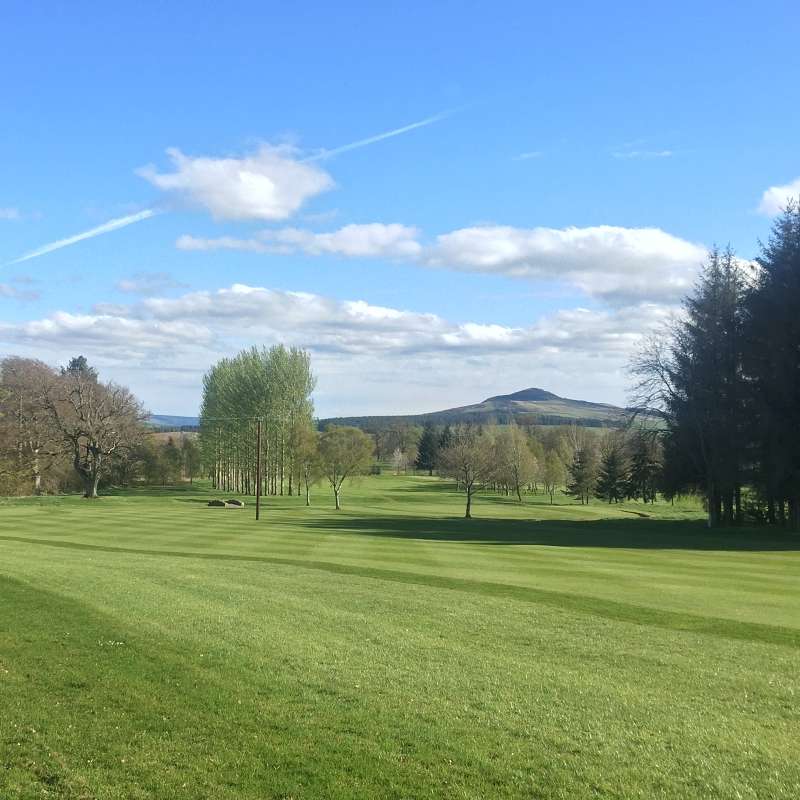 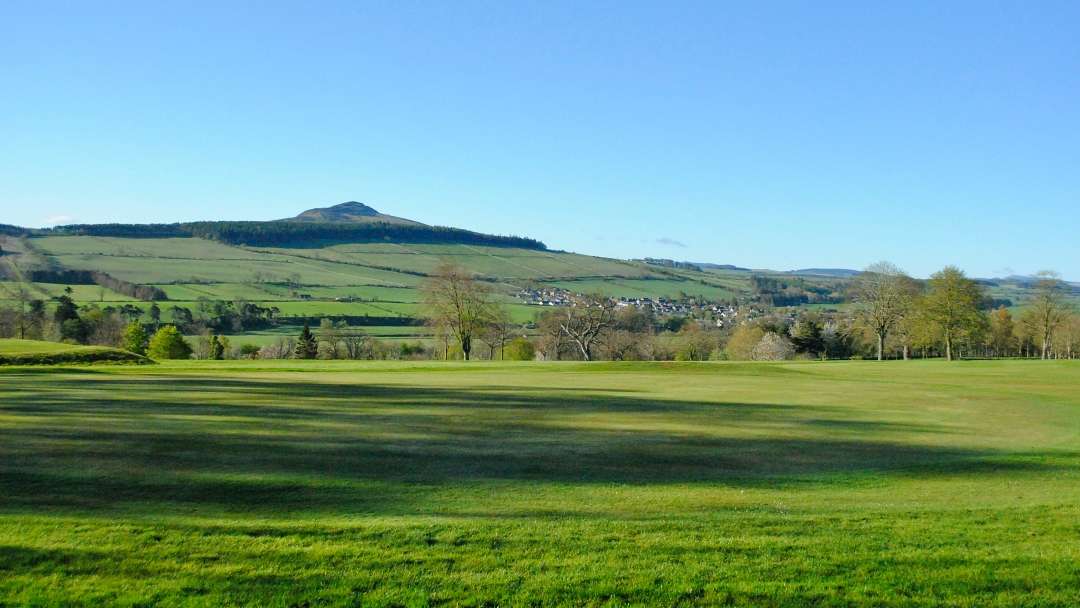 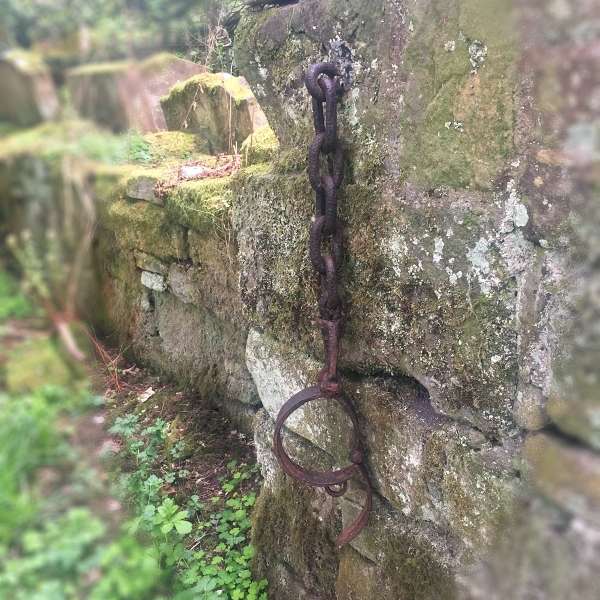 The jougs at Minto Old Parish Church site On the remains of the south wall of a burial enclosure. The iron collar would be put round an offender’s neck as a form of punishment. 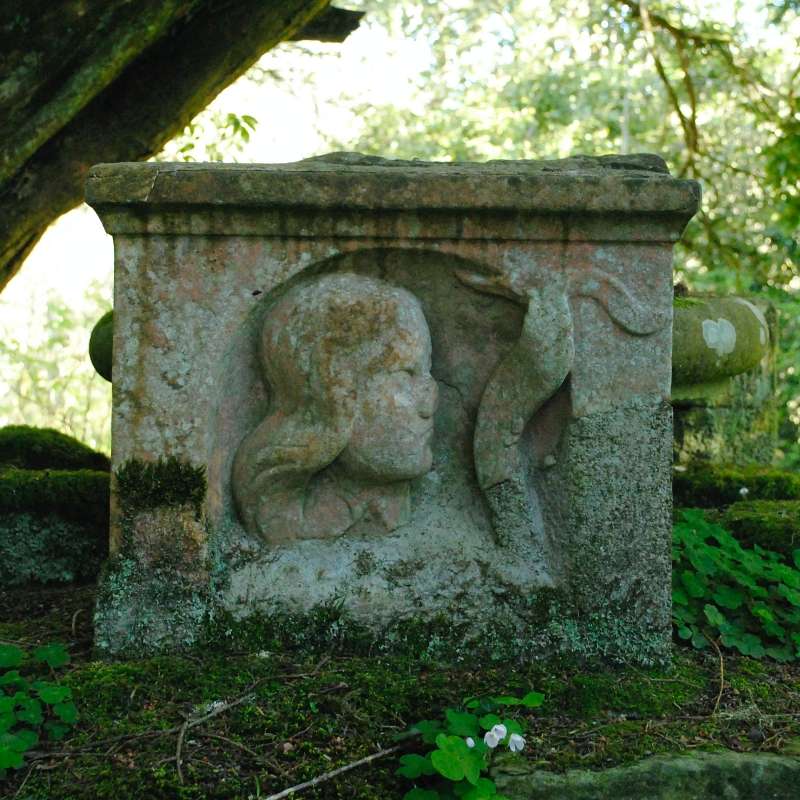 The old headstones at theMinto Old Parish Church are under the canopy of ancient yew trees.

Described as a relatively small and locally focused event, The Border Pageant was unabashedly held to raise money for the Girl Guide movement at a regional level and in order to improve the local contribution to national funds of the organisation. Despite bad luck with the weather on the day, it turned into something of a triumph for its well-to-do organisers. This success was almost certainly the result of the coup they achieved in managing to obtain the attendance of one of the most glamorous members of the royal family, Prince George (fourth son of George IV and Queen Mary and then fifth in the line of succession). Moreover, the Prince was paying his very first trip to the Scottish Borders in order to grace the pageant, a fact that attracted a good deal of news coverage. With royalty in attendance and many titled women as organisers, a great number of the Borders County set likely also came along to the pageant, which loaned the whole event extra social cachet; a local newspaper described it as ‘a brilliant assemblage of Scottish society’

Held in the grounds of Minto House with 700 performers and an incredible 10,000 people in attendance. The pagent outlined the history of the Scottish Borders.

A detailed account by Angela Bartie, Linda Fleming, Mark Freeman, Tom Hulme, Alex Hutton, Paul Readman, ‘Border Historical Pageant and Countrie Fayre’, The Redress of the Past can be found here and a video of some of the event is below. 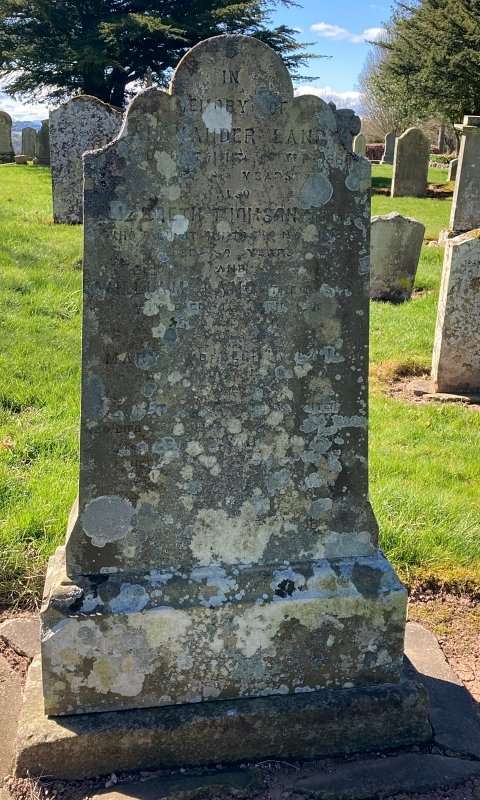 In around 1856, John Lang and Elizabeth Learmonth arrived in Australia to start a new life in the new world. The Lang family of Minto were weavers who lived at Cleuchhead during the eighteenth century.

Upon visiting Minto from Australia in 2016 & 2019 the current family came across the Lang family headstone. Whilst still standing, the headstone had not been touched for many decades and as such the weather had taken its toll on the lettering and the structure itself.

The village was delighted to help coordinate the restoration of the headstone which was kindly funded from Australia.  In the Spring of 2021, the careful re-seating and restoration work was completed by by John Beattie & Sons. 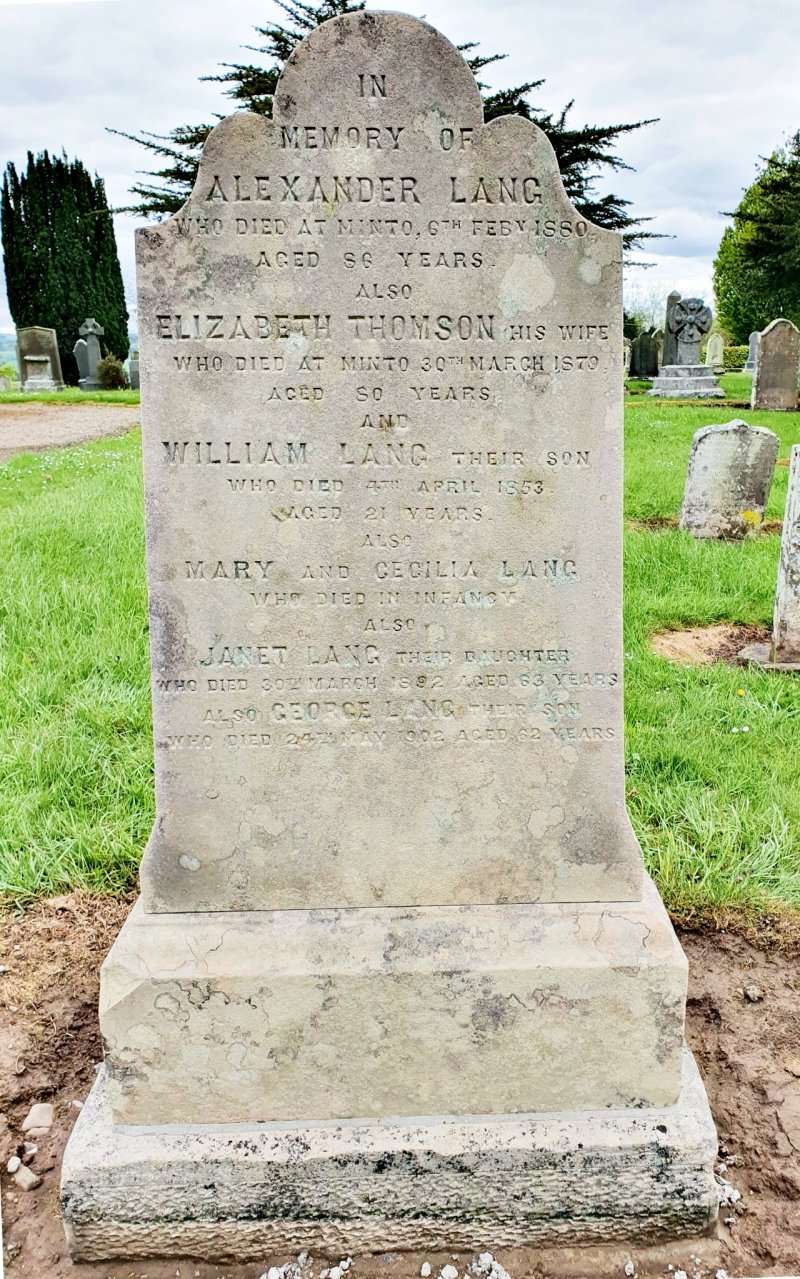