Minto is but one small village in the Scottish Borders. Hassendean, Lilliesleaf, Bedrule, Ancrum, Nisbet and many others have equally rich and varied histories. The market towns of Melrose, Jedburgh, Selkirk, Kelso plus the largest Border town and home of Cashmere, Hawick are all close by. The historic Village of Denholm is but a mile away.

Unveiled by Sir Douglas Haig in September, 1921, the Minto War Memorial is one of the most distinguished memorials to be found in the country. The base of stone quarried from Minto Crags is surmounted by a life size statue of a British soldier. Although he wears the uniform of a private soldier, the face of the statue is said to have been modelled on that of Lt. Esmond Elliot, the son of the Earl of Minto who was killed near Ypres in 1917. 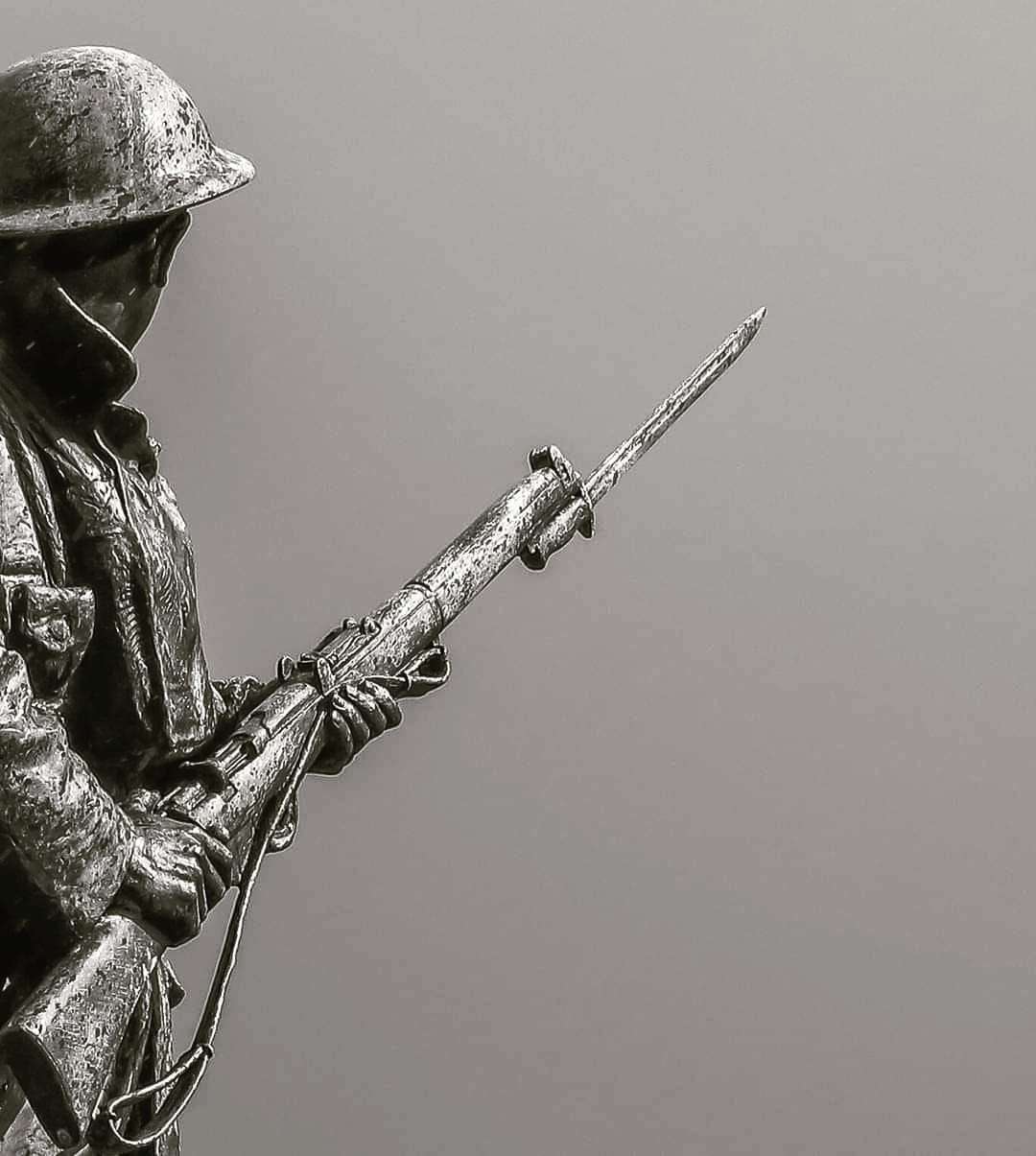 In September 1921, Sir Douglas Haig unveilled the War Memorial at Minto in a speech he said:

“They were met to do honour to the memory of seven gallant men of their own stock, who left Minto Parish to fight for King and country during the Great War, and gave their lives to the most splendid of all causes”.

On a base of stone quarried from Minto Crags is a life size statue of a British soldier. Although he wears the uniform of a private soldier, the face of the statue is said to have been modelled on that of Lieutenant Esmond Elliot, the son of the 4th Earl of Minto who was killed near Ypres in 1917. 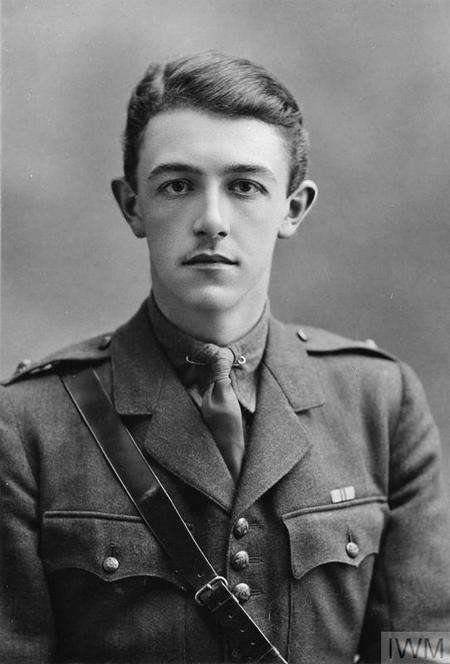 On the memorial’s completion, the Countess of Minto is reputed to have had the figure turned from its original position of facing the family estate because she said that “A British soldier never turns his back on the enemy“.

In preparation for the Passchendaele Offensive, which began on 31 July 1917, Esmond led a daring raid across the Yser Canal, returning with vital intelligence which helped the Guards Division in their successful seizure of the bank on the enemy side four days before the main assault. A week later, while in command of his Company, he was killed by a single bullet.

Compiled from his grieving mother’s memorial of his life, together with his letters, diaries and photographs from the front. Esmond’s jottings, direct and spontaneous, reveal the rapid transformation and maturing of a young officer exposed to war. His mother’s collection of letters shows the extent to which one life, albeit brief, touched so many people and how the memory of it, and the influence of his goodness, left a lasting impression

from ‘The Lay of the Last Minstrel’ – Sir Walter Scott

‘On Minto Crags the moonbeams glint where Barnhill hewed his bed of flint; Who flung his outlawed limbs to rest where falcons hang. their giddy nest ‘Mid cliffs from whence his eagle eye For many a league his prey could spy; Cliffs, doubling, on their echoes borne The terrors of the robber’s horn.’ 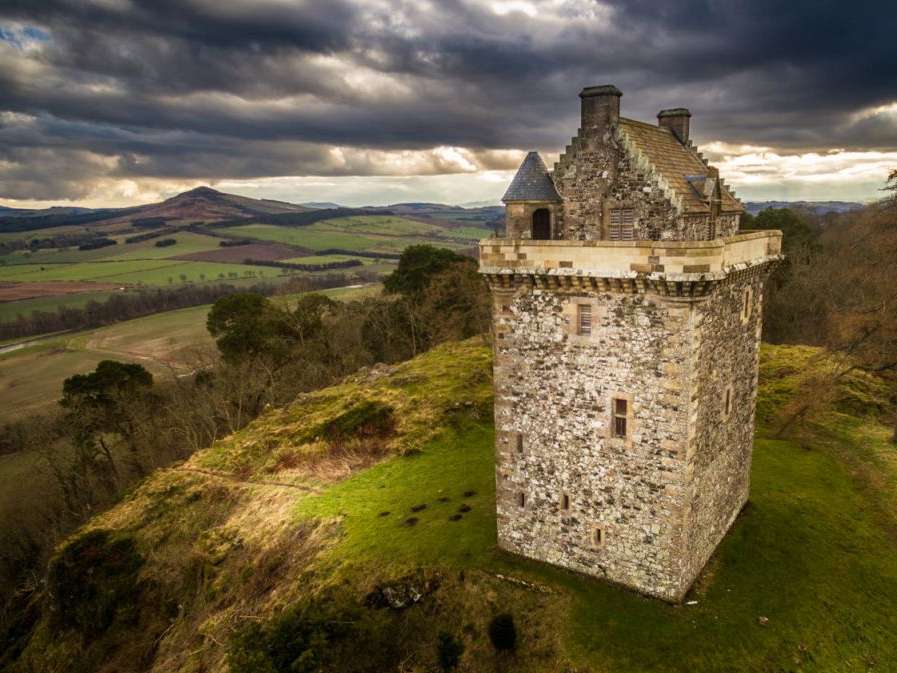 The castle was acquired by Sir Gilbert Elliot in 1705,  It was extensively restored in 1857, while the interior was renovated by Sir Robert Lorimer in 1897–8 as a shooting lodge and private museum. The building was in use until the 1960s. On 18 November 2011, it was announced that a major restoration of the building would take place, with work expected to be complete by 2013 In mid-2013, the caphouse, parapet and roof were successfully renovated

Fatlips Castle was the stronghold of the noted Border Reiver, Turnbull of Barnhill. The tower of “Mantoncrake”or “Mynto Crag” was burnt in Hertford’s raid on the Scottish Borders in 1545. Following the Turnbulls, the tower has been owned by Sir Gilbert Elliot who’s descendants became Earls of Minto and own the property to this day. 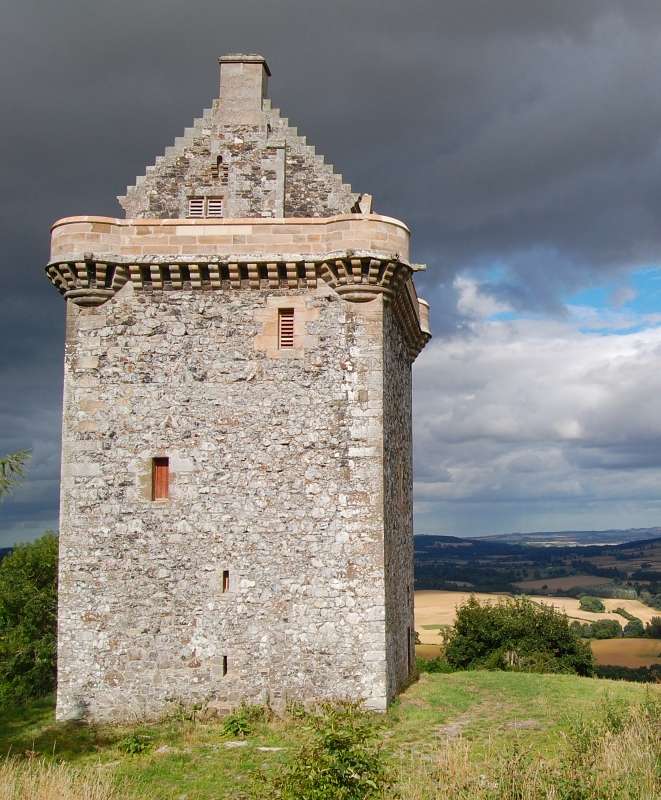 Destroyed in 1545 by Lord Hertford (Edward Seymour) sent by England’s King Henry VIII who was pursuing Mary Queen of Scots’ betrothal to his son Edward VI. Fatlips Castle was restored in 1857 by Sir Gilbert Elliot and the interior was renovated by the architect Sir Robert Lorimer in 1898 as a shooting lodge and private Elliot museum.

In November of 2011, Historic Scotland with the Minto family took on the task of restoring Fatlips. Standing once again proud against the skyline and giving spectacular views across the borders 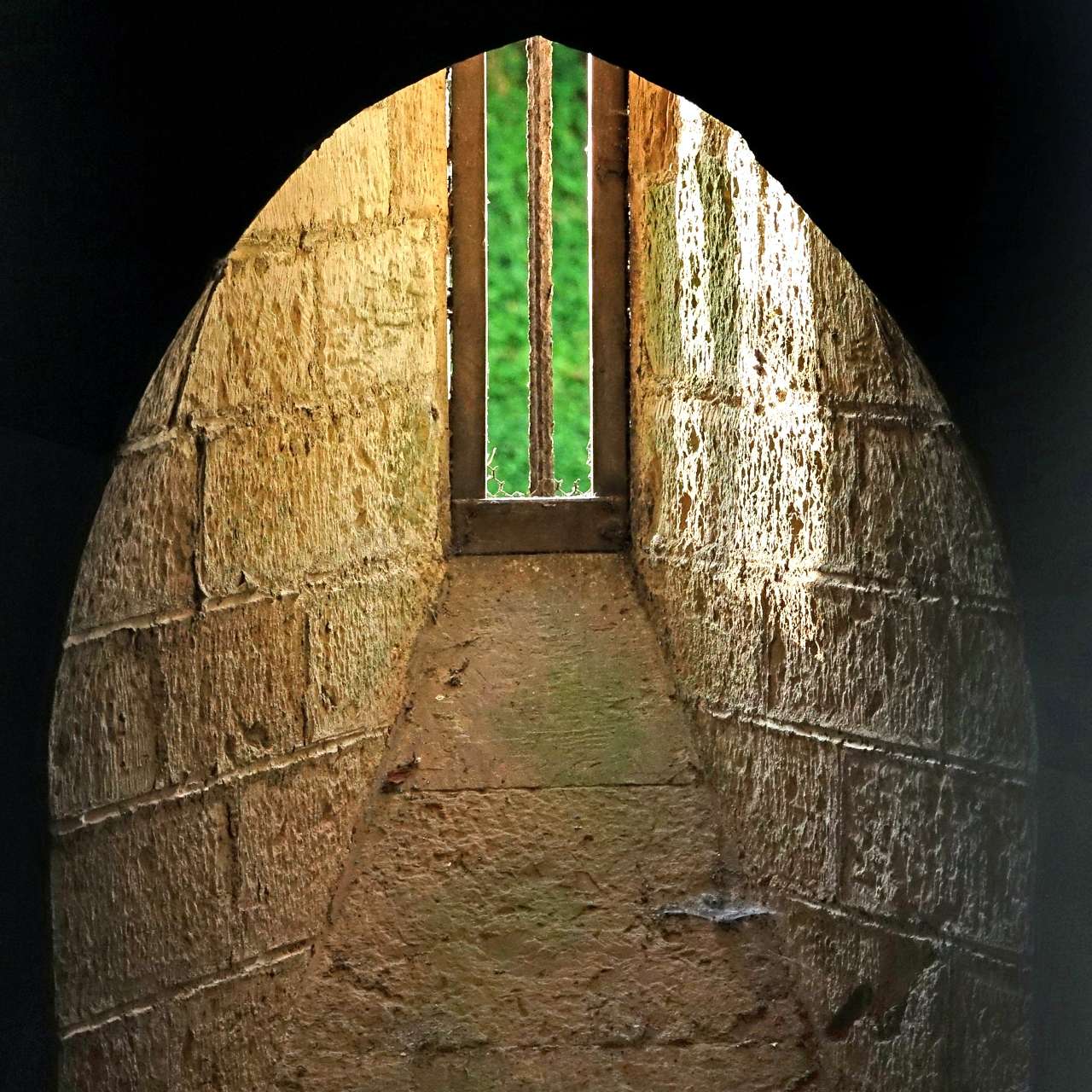 A View from inside the Church at Minto by Eric Scotland 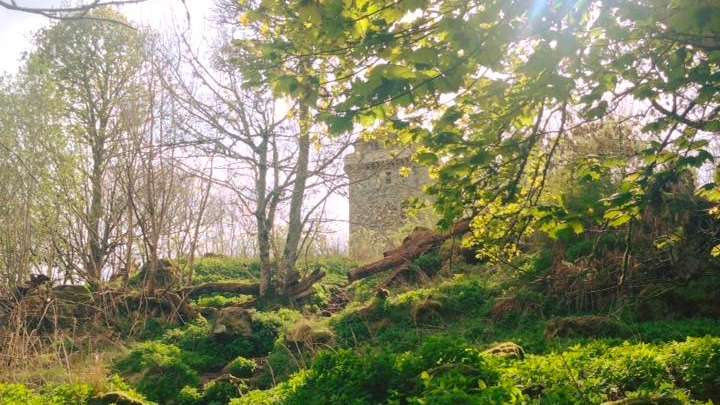 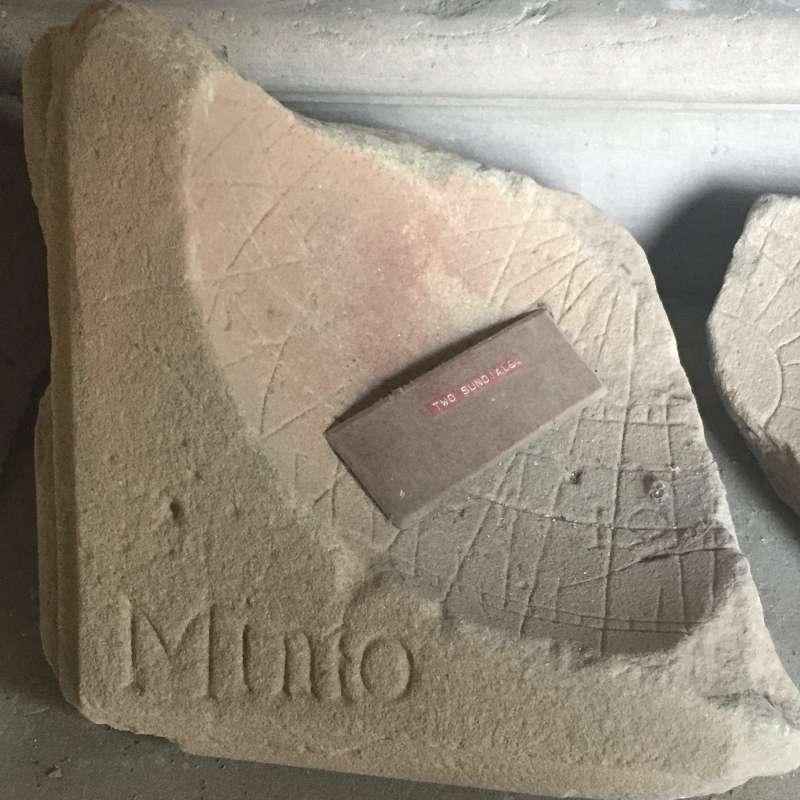 A section of sundial recovered from the nearby burn in 1983 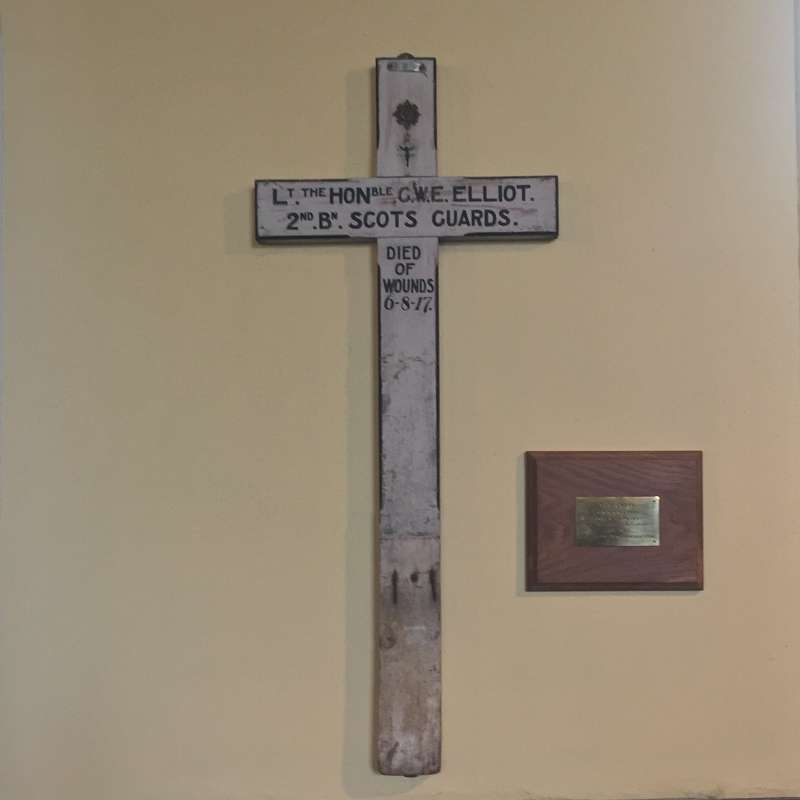